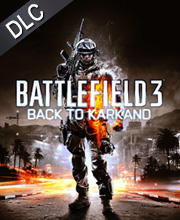 What is Battlefield 3 : Back to Karkand CD key?

It's a digital key that allows you to download Battlefield 3 : Back to Karkand directly to PC from the official Platforms.

How can I find the best prices for Battlefield 3 : Back to Karkand CD keys?

Allkeyshop.com compares the cheapest prices of Battlefield 3 : Back to Karkand on the digital downloads market to find the best sales and discount codes on trusted stores.

Battlefield 3: Back to Karkland is an action, adventure, FPS videogame expansion pack for Battlefield 3 developed by EA Digital Illusions CE and published by Electronic Arts.

Back to Karkand features four of the most beloved Battlefield 2 maps (Strike at Karkand, Gulf of Oman, Wake Island and Sharqi Peninsula), all fully re-imagined utilizing the power of the Frostbite 2 engine. Battle it out with ten new weapons that you can bring back to the base game and three new vehicles including the STOVL fighter jet, desert buggy, and an APC.

The Frostbite 2 engine creates a whole new level of life-like destruction. The enhanced destruction in this expansion pack lets you turn entire maps into rubble. Chip away at cover, blow holes in walls, and bring down building façades on enemies.

Back to Karkand marks the return of the classic Conquest Assault mode from Battlefield 2. A slight twist on the beloved Conquest mode, Conquest Assault starts with one team commanding all flags on the map while the opposing team must assault and take the flags over in order to stop their tickets from bleeding down to zero.

Players can express their individuality with five new dog tags including Dolphin Diving and One Man Army. Players can pick the design that showcases their play style best and show it off on the battlefield.

EU ORIGIN CD KEY (EUROPEAN ORIGIN CD KEY): Requires an European IP address or you must activate it with a VPN (Virtual Private Network) in order to play Battlefield 3 Back to Karkand. Might have languages restrictions or language packs. Read the description on the store game page to know if the EU IP is only needed for activation or for playing also (maybe on EU Servers). Most of the stores offer you their help, or show you how to do this with a tutorial to follow.
ORIGIN CD KEY : Use the Origin Key Code (Electronic Arts - EA) on Origin Platform to download and play Battlefield 3 Back to Karkand. You have to login to your Origin Account or create one for free. Download and install the Origin Software HERE) then you can activate the game on it. Once installed, start Origin, click on the Origin Tab and click on Redeem Product Code and just enter the key. The game will appear in your My games list.
DLC
Limited Edition

Is this legit? please someone who bought answer.

Yes it is 100% legit! You can check that on the store website itself.