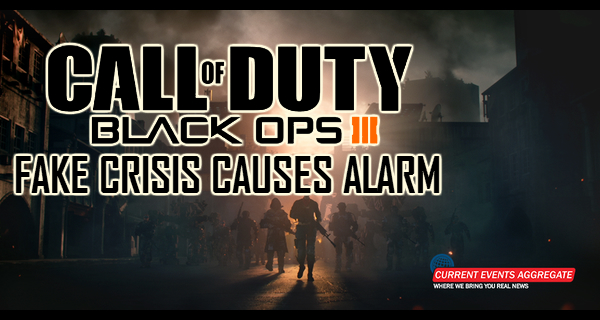 In an attempt to make more noises for the upcoming release of Call of Duty Black Ops 3, the official Call of Duty Twitter account posted a series of tweets which caused alarm to netizens. On September 29th, the official Call of Duty Twitter account was temporarily renamed to “Current Events Agg.” The said account posted a series of tweets that talked about a (fictional) terror attack. The post even mentioned real-life places such as Singapore, which definitely gave an impression that the said terror attack is really happening. “BREAKING NEWS: Unconfirmed reports are coming in of an explosion on the North bank of the Singapore Marina,” the first among the series of alarming tweets read.

The cause of the explosion is unknown, but large plumes of dark smoke have been seen rising from the site. pic.twitter.com/dsJZ6hti7Y

“Citizens living in the area are being asked to stay in their homes, and to keep their doors and windows closed,” another tweet said.

The scare-fest ended with, “This was a glimpse into the future fiction of #BlackOps3.” One Twitter user with the handle, @kje1995 replied to one of the tweets and said, “@CallofDuty This tweet comes at a bad time considering with what’s going on in the world. This turns me away from further buying COD games.” No one from Activision nor from the Call of Duty Twitter team has given any comment about the said incident. Meanwhile, the official Call of Duty Black Ops 3 Story Trailer has been released a day after the Twitter scare-fest happened.     Call of Duty Black Ops 3 will be officially released on November 6, 2015 for the PC, Xbox 360, Xbox One, Playstation 3, and Playstation 4. What do you think of this move by the Call of Duty folks? Let’s discuss!

It’s Call of Duty Twitter account, not a news account. Maybe it was written at the wrong time, but there are other channels to read news.
Anyway, we’re going to play a new CoD! 😀