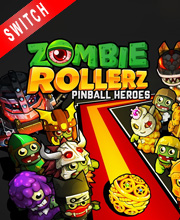 It's a digital key that allows you to download Zombie Rollerz Pinball Heroes directly to Nintendo Switch directly from Nintendo eShop.

How can I find the best prices for Zombie Rollerz Pinball Heroes on Nintendo Switch ?

Allkeyshop.com compares the cheapest prices of Zombie Rollerz Pinball Heroes on the digital downloads market to find the best sales and discount codes on trusted stores.

Zombie Rollerz Pinball Heroes will have you shooting, smashing, and slamming your way against hordes of zombies in a game that mashes up zombie defense, pinball, and roguelike in one!

Zombie Rollerz: Pinball Heroes is the perfect mix of pinball and roguelike games, with tons of zombies to defeat. Full of non-stop action, tons of unlockables, and a fun colourful artstyle, this is a game you absolutely have to play!

Zombie Rollerz: Pinball Heroes is a stress-free experience with enough challenge to give you an adrenaline rush. It is super easy to shoot pinballs, target meteors, and throw axes at zombies. You can choose to scrape by and advance to the next battle, but it is a delightful feeling when you receive a good ranking. Most people are familiar with pinball, so understanding how the flippers work almost comes naturally. Zombie Rollerz doesn’t require brain power to enjoy and some of the choices you make will lead to random outcomes anyway. It isn’t as easy as it looks, but it doesn’t take long to get into the rhythm of things and send zombies flying.

Zoom 1m 3m 1y All
Track product
NINTENDO CODE : This is a digital code for Zombie Rollerz Pinball Heroes. Use the download code on the Nintendo eShop of your Console. Once connected to the Nintendo eShop, you can enter and redeem the Download Code. Read carefully the store description about any language and region restrictions.
Standard Edition
Compare Choose & Buy Download (803)