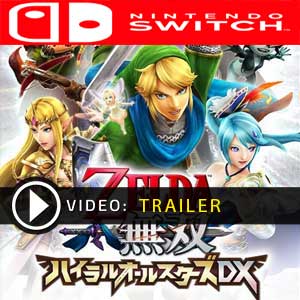 Find the best stores and prices to buy Nintendo Switch Code Online. Receive your code by mail and download Zelda Musou Hyrule All Stars DX or find a better price for Box Game.

Enjoy the best deal for Zelda Musou Hyrule All Stars DX with Allkeyshop.com!

Zelda Musou: Hyrule All Stars DX or Hyrule Warriors: Definitive Edition is an action, hack-and-slash video game that is developed by Omega Force with Team Ninja and published by Koei-Tecmo and Nintendo.

There had been some graphic revisions in order for the game to fit the console specs, also all the DLC plus the characters had been made into the Vanilla version for the Nintendo Switch port. Players would be able to use up to four characters that are playable per stage. “Level 4+” will now be the new maximum level cap for weapons. Players are also able to purchase any previously earned items with rupees because of the addition of the Items Card Shop to the Adventure Mode. With this new edition, the My Fairy section has been rendered in 3D and the Joy-Con co-op was also made available. In addition, Zelda and Link will also have the Breath of the Wild costumes.

You and your friends would surely have a great time playing Zelda Musou: Hyrule All Stars DX!

JAPAN BOX GAME : This is a Japan import of Zelda Musou Hyrule All Stars DX Nintendo Switch in Box Edition (DVD-CD ROM). This is not a downloadable product. Please read the sellers page for any additional costs (taxes, shipping), delivery time for your country and languages available.
Standard Edition. Read the store description to know the content.

Be the first one to write a review about Zelda Musou Hyrule All Stars DX !