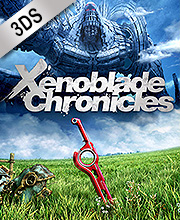 It's a digital key that allows you to download Xenoblade Chronicles 3D directly to Nintendo 3DS directly from Nintendo eShop.

How can I find the best prices for Xenoblade Chronicles 3D on Nintendo 3DS ?

Allkeyshop.com compares the cheapest prices of Xenoblade Chronicles 3D on the digital downloads market to find the best sales and discount codes on trusted stores.

The game is about a conflict between humans and machines, the battle started at the begining of the world with a battle between the two gods: Bionis and Mechonis. The story start as a quest of revenge and also of research. You take the role of Shulk, a young “Homz” of 18 years old living in the 19 colony. After his home town has been attacked, he decide to leaves on a journey of vengeance with the powerful weapon-the Monado.

The system of real-time battle is interesting. You will be able to control only one character in a fight, your allies will perfom attacks on their own. You have special skills called “arts”, and will have to manage the battle with them and your basic melee or ranged attacks.

The characters learn traits and abilities through a simple skill tree of 3 paths. You can also borrow skills as you improve your relationship with other caracters. Xenoblade demands your attention at each moment, you can’t really zone out, but this means, a real action game!