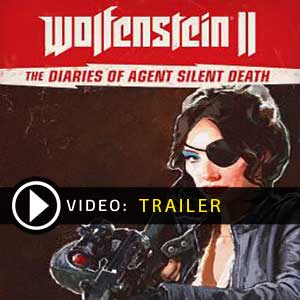 You can participate to these tests by adding comments about your digital download purchase in the store review page. Enjoy the best deals for Wolfenstein 2 The New Colossus Episode 2 The Diaries of Agent Silent Death CD Key with Allkeyshop.com!

Agent Silent Death (Jessica Valiant) and her husband were spies battling the Nazis but Silent Death’s husband was killed after being captured. Silent Death is called back into action after years out of duty to kill the men responsible for her husband’s demise.

Agent Silent’s gameplay consists of stealth-based deaths. Like the name suggests, The Diaries of Agent Silent Death focuses on stealth play. From the start, players can crawl and even use a silenced pistol, and a few throwing knives. You can also crawl into small spaces and hide while going around each of the three levels.

It is possible to make it through The Diaries of Agent Silent Death with raw force. Also the last level seems almost impossible to get through without being discovered.

You will definitely enjoy crawling in small spaces and fighting in this game!

Be the first one to write a review about Wolfenstein 2 The New Colossus Episode 2 The Diaries of Agent Silent Death !