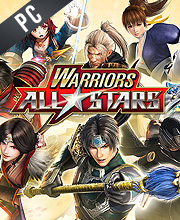 What is Warriors All-Stars CD key?

It's a digital key that allows you to download Warriors All-Stars directly to PC from the official Platforms.

How can I find the best prices for Warriors All-Stars CD keys?

Allkeyshop.com compares the cheapest prices of Warriors All-Stars on the digital downloads market to find the best sales and discount codes on trusted stores.

Warriors All-Stars is an action video game developed and published by Koei Tecmo Games Co., Ltd. This is the first ever all-stars title to come out of Koei Tecmo.

This single player hack-and-slash video game will have players choosing from an all-star Warriors cast. Players will also get to choose four other supporting characters that can assist by lending their abilities in fighting the enemies. Some character pairs are able to combine attacks during assists.

Hero Cards are also available for your character to grow in the game. These may be equipped any time during the game and it will increase your hero’s abilities. The Hero Cards can be bought or sold with gold and earned.

Each stage in the game is themed to the different available characters in the game. And the story of the game that will unfold is based on the character that you have chosen to play. The game’s stories are nonlinear and could have multiple endings.

Play in the ‘Hero Battles’ in order to unlock additional characters and play in the ‘Key Battles‘ to advance in the game’s story.

Enjoy each epic story and diverse characters in Warriors All-Stars.

EUROPEAN STEAM GIFT : It’s a steam gift for Europe which requires an European IP address to activate and to play Warriors All-Stars on Steam. Read carefully the store description about region and language restrictions.
STEAM CD KEY : Use the Steam Key Code on Steam Platform to download and play Warriors All-Stars. You must login to your Steam Account or create one for free. Download the (Steam Client HERE). Then once you login, click Add a Game (located in the bottom Left corner) -> Activate a Product on Steam. There type in your CD Key and the game will be activated and added to your Steam account game library.
Standard Edition