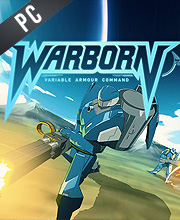 What is WARBORN CD key?

It's a digital key that allows you to download WARBORN directly to PC from the official Platforms.

How can I find the best prices for WARBORN CD keys?

Allkeyshop.com compares the cheapest prices of WARBORN on the digital downloads market to find the best sales and discount codes on trusted stores.

WARBORN is a strategy video game that is developed by Raredrop Games Ltd and published by PQube Limited.

Step into your Variable Armor and deploy for battle! The whole solar system is in war and you must take charge of your strike force in their advanced suits of war and claim victory.

Offering turn-based tactical combat where players are able to choose from four commanders. You must plan in advance before moving any of your units. If the going gets tough, call on reinforcements, assemble them and immediately lead them into battle. Battle sequences are cool as they are presented in 90s Japanese animation.

There are different terrain types on the battlefield which are composed of hexagonal area tiles. Gain additional resources by capturing structures.

Every Variable Armor in the game comes with their own specialist equipment and unique skills. Players are able to inflict status effects, support allies and even plant traps. Play in the two game modes available which are the campaign and skirmish & multiplayer. The campaign will bring you to the Auros System where war and political uncertainty is currently happening. This will have 40+ available missions. Skirmish & Multiplayer will have players configuring their own match parameters as well as developing new tactics. Players are also able to battle online with players across the world.

STEAM CD KEY : Use the Steam Key Code on Steam Platform to download and play WARBORN. You must login to your Steam Account or create one for free. Download the (Steam Client HERE). Then once you login, click Add a Game (located in the bottom Left corner) -> Activate a Product on Steam. There type in your CD Key and the game will be activated and added to your Steam account game library.
STEAM KEY ROW : It means for Rest Of the World countries which are not concerned by the region restrictions. This product can't be purchased and activated in Several countries. Please read the store description to know the full list of countries which are concerned. Use the key to Download and play WARBORN on Steam.
Standard Edition