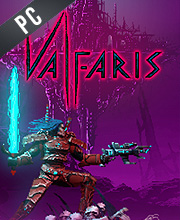 What is Valfaris CD key?

It's a digital key that allows you to download Valfaris directly to PC from the official Platforms.

How can I find the best prices for Valfaris CD keys?

Allkeyshop.com compares the cheapest prices of Valfaris on the digital downloads market to find the best sales and discount codes on trusted stores.

Valfaris is an action video game that is developed by Steel Mantis and published by Digital Uppercut Productions.

From the team behind Slain: Back From Hell comes a 2D action-platformer that is soaked to the brim with heavy metal. You will find yourself in the far corners of space where deadly enemies are waiting for you. All of these are presented in impressive pixel art and a savage soundtrack.

The fortress of Valfaris which has previously disappeared has now reappeared once again but in the orbit of the dying sun. This had once been a paradise but is now being eaten by the darkness.

You will play as Therion, the son of Valfaris. He is fearless and proud and is curious as to what has befallen his father’s fortress. As Therion, you must uncover what had happened and fight to reverse the dark fate of your homeland.

Forged from the ground up, get to enjoy fighting enemies and bosses with a wide array of weaponry. Explore the diverse environments that Valfaris offers all while enjoying its amazing soundtrack from Curt Victor Bryant, the former Celtic Frost guitarist.

GOG.COM CD KEY : You need to register on Gog.com, then use the GOG Key to download and activate your game to play Valfaris.
STEAM CD KEY : Use the Steam Key Code on Steam Platform to download and play Valfaris. You must login to your Steam Account or create one for free. Download the (Steam Client HERE). Then once you login, click Add a Game (located in the bottom Left corner) -> Activate a Product on Steam. There type in your CD Key and the game will be activated and added to your Steam account game library.
Deluxe Edition
Standard Edition

Beautiful, great and challenging game. Oh, forgot that it’s fun too! Think I spent just over 12 hours from start to finish, where a few of those hours were spent solely on the last boss… es!