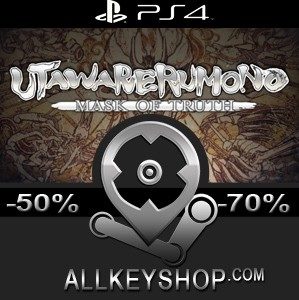 You can participate to these tests by adding comments about your PS4 Game Code purchase in the store review page. Enjoy the best deals for Utawarerumono Mask of Truth Game Code with Allkeyshop !

An iron fist now rules the Yamamoto Empire, and the ruthless, tyrant wants to enslave everyone before him. The only ones that can help would come together and fight against the Imperial Army. Although it is a civil war other nations are still affected because their generals are forced to choose whether to fight for the empire or the anti-empire.

The game features more than 80 hours of gameplay with a very rich story. There are a lot of things to discover like new nations, secrets, people and much more. An updated Battle System makes all your battles fast paced and strategic. Take advantage of extended Action Chains and a higher level cap. Co-op Final and Co-op Chains will let you partner up with certain characters to give out devastating blows. An all new Mock Battle is also available where players get to practice their moves while earning some EXP/BP.

Utawarerumono: Mask of Truth offers a magical storybook that come alive right in front of you.

Be the first one to write a review about Utawarerumono Mask of Truth !