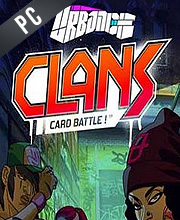 It's a digital key that allows you to download Urbance Clans Card Battle directly to PC from the official Platforms.

How can I find the best prices for Urbance Clans Card Battle CD keys?

Allkeyshop.com compares the cheapest prices of Urbance Clans Card Battle on the digital downloads market to find the best sales and discount codes on trusted stores.

Urban Clans Card Battle or (UCCB) is a strategy video game that is developed by Steambot in cooperation with Fishing Cactus and published by Fishing Cactus, Steambot and Plug In Digital.

This is Neo-City! Street gangs are on the rise and you must also gather your own and take over district by district until you have taken over the whole city. To survive in this cut-throat times you must show no mercy.

Offering a unique fighting system where you can use your clan to protect yourself! Use them as a shield so that the collateral damage would be less. Your allies and weapons are represented as cards. You can unlock new ones as you defeat opponents and with that, you are able to edit your deck.

To conquer Neo-City, there will be 5 neighborhoods to conquer as well as 20 plus gangs to defeat! Get to create your name by eradicating all of them!

Get more weapons and allies by going through the game’s history mode called the Urbance Pilot, here you will get to go on a full adventure as well as search for CODES painted on walls as graffiti. These will let you unlock new cards!
Minimum System Requirements:
Shop
Platform
Edition
Price (without fees)
Fees
AKS SCORE
—
Loading offers...
There's currently no offer for this game.
Show more offers Show all offers

STEAM CD KEY : Use the Steam Key Code on Steam Platform to download and play Urbance Clans Card Battle. You must login to your Steam Account or create one for free. Download the (Steam Client HERE). Then once you login, click Add a Game (located in the bottom Left corner) -> Activate a Product on Steam. There type in your CD Key and the game will be activated and added to your Steam account game library.
Standard Edition

I think the game is good with cyberpunk style, Card games and strategy fans will like this game and especially with that low price!