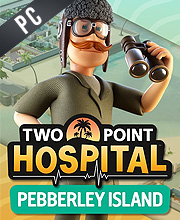 It's a digital key that allows you to download Two Point Hospital Pebberley Island directly to PC from the official Platforms.

How can I find the best prices for Two Point Hospital Pebberley Island CD keys?

Two Point Hospital: Pebberley Island is a simulation game published by SEGA and developed by Two Point Studios for PC. The Pebberley Island component of the title refers to downloadable content, therefore the base game is required in order for players to access said content.

The protagonists is a part-time explorer named Wiggy Silverbottom and you must aid him in his attempt to traverse the notorious germaphobe on a quest to uncover the secrets of eternal life.

Wiggy’s primary post is a hospital administrator however, he cannot unlock the most majestic of bounties absent your aid. Help him expand his medical frontiers, experience new sights and unveil the most shrouded secret of all.

This iteration of the game comes with three new hospitals, a vast array of new illnesses and a lot of tropical paraphernalia to place in your spectacular hospitals. This expansion also introduces new game play which encompasses three exciting new scenarios. Commence your adventures in the balmy climes of Pebberley Reef, an idyllic atoll paradise, before delving into dense, uncharted country in Overgrowth. Clear spaces for your own hospital as you seek to cure a wide range of new illnesses.

This DLC also comes bearing a summit that’ll keep you on your toes right to the last moment.

Two Point Hospital Pebberley Island is good game, you can buy it now with best price.

Ah this one brings memories, I like this sort of games, they’re amusing time killers. You’ll have a lot of fun time playing this game.

A nice game, good successor to the legendary, “Theme Hospital”.
It’s worth playing it, with DLCs

I’ve always been interested in this type of simulators, very entertaining and with lots of humor!