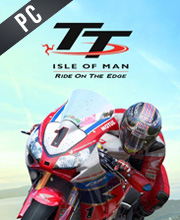 What is TT Isle Of Man Ride on the Edge CD key?

It's a digital key that allows you to download TT Isle Of Man Ride on the Edge directly to PC from the official Platforms.

How can I find the best prices for TT Isle Of Man Ride on the Edge CD keys?

Allkeyshop.com compares the cheapest prices of TT Isle Of Man Ride on the Edge on the digital downloads market to find the best sales and discount codes on trusted stores.

TT Isle of Man: Ride on the Edge is a sports, racing video game that is developed by Kylotonn Games and published by Bigben Interactive.

The most intense, thrilling superbike racer is here. The track is so brutal that racers would be crazy to take on it. The tracks are narrow with hills and different kinds of curves not to mention that players will have to race through towns as well.

Featuring a daunting 37.75 miles of the circuit with different layouts, 36 riders, and their powerful superbikes. Not only will the game include the legendary race track but it will also have a fantasy circuit where starting players can hone their skills upon.

A new experience is also made available with the side-car option which would prove to be a challenge even to the most skilled riders.

Will you be able to conquer the tedious Isle of Man? Choose your rider and superbikes and find out!

EU STEAM CD KEY: Requires an EUROPEAN IP address or you must activate it with a VPN (Virtual Private Network) in order to play TT Isle Of Man Ride on the Edge. Might have languages restrictions or language packs. Read the description on the store game page to know if the EU IP is only needed for activation or for playing also (maybe on EU Servers). Most of the stores offer you their help, or show you how to do this with a tutorial to follow.
EUROPEAN STEAM GIFT : It’s a steam gift for Europe which requires an European IP address to activate and to play TT Isle Of Man Ride on the Edge on Steam. Read carefully the store description about region and language restrictions.
STEAM CD KEY : Use the Steam Key Code on Steam Platform to download and play TT Isle Of Man Ride on the Edge. You must login to your Steam Account or create one for free. Download the (Steam Client HERE). Then once you login, click Add a Game (located in the bottom Left corner) -> Activate a Product on Steam. There type in your CD Key and the game will be activated and added to your Steam account game library.
Standard Edition

TT Isle Of Man Ride on the Edge is the game of the hardest insane motorcycle road racing competiton in the world. The race track is more relistic that I thought, very hard to master, but it’s absolute pleasure to at least try to feel the craziness of the feeling of speed and beauty of this insane race. I just love it!

Thanks for all good deals to allkeyshop.com i always check these pricess when i take a game Allkeyshop is the best

This is the game ive been waiting for over decade.Seems promising but they need to fix : Engine sound because it needs to be more agressive and louder,transmission and physics.If they manage to do that most of us gonna spend many hours just casually driving on the isle﻿