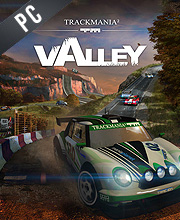 What is TrackMania 2 Valley CD key?

It's a digital key that allows you to download TrackMania 2 Valley directly to PC from the official Platforms.

How can I find the best prices for TrackMania 2 Valley CD keys?

Allkeyshop.com compares the cheapest prices of TrackMania 2 Valley on the digital downloads market to find the best sales and discount codes on trusted stores.

TrackMania 2 Valley is a racing video game developed by Nadeo and published by Ubisoft. And one of the most enjoyable parts of the TrackMania series.

Trackmania 2 features a simple and fun gameplay which is easy to pick up and learn, but hard to master. This is the kind of gameplay that only TrackMania can deliver. It offers a great experience with fun and adrenaline-pumping racing, an array of stunning cars on sensational tracks as a major enhanced sequel to Nadeo Studio’s online racing phenomenon TrackMania, already enjoyed by millions of players.

A game where your skill is everything. No gimmicks or anything, it’s all about shaving off milliseconds with precise and skillful driving.

TrackMania² Valley isn’t your traditional driving game as it comes with racing in a fully customizable world of tracks generated and powered by players themselves! Enjoy loops, wall rides, ramps and a multitude of other stunts, you’re in for the ride of your life.

If you’re new to TrackMania, let me say that TrackMania 2 is AWESOME! It is basically a time trial game, but what an amazing piece of work!