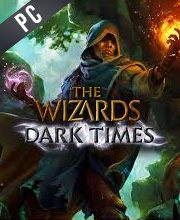 What is The Wizards Dark Times CD key?

It's a digital key that allows you to download The Wizards Dark Times directly to PC from the official Platforms.

How can I find the best prices for The Wizards Dark Times CD keys?

Allkeyshop.com compares the cheapest prices of The Wizards Dark Times on the digital downloads market to find the best sales and discount codes on trusted stores.

The Wizards Dark Times is an action–adventure that is developed and published by Carbon Studio. The game requires a virtual reality headset.

Put on your VR headset and let your brand new journey begin! The wizards are back and this time in a reworked gesture-based spellcasting system. There will also be new environment interactions, new enemies that are sure to be challenging, and of course, Aurelius that witty Narrator is back!

Welcome back to Meliora, where the plague has befallen the realm. Each inhabitant that has been infected becomes twisted with madness and hatred. Rogue wizards as well as forbidden powers are present which leaves you the only one facing the apocalypse by yourself.

There are 11 individually designed spells that you are able to discover and master. Each one of the spells has distinct abilities and effects.

Also, like a true wizard, use hand gestures to command the arcane forces, instead of using button combinations.

The realm does come with a lot of fantastic creatures, those who have fallen to the plague turn into beings of death with unique abilities so expect a challenging adventure with The Wizards Dark Times.

STEAM GIFT : A Steam gift is a one-time transfer you receive. You activate and install The Wizards Dark Times to play on Steam, it is a non-refundable game that stays in your Steam games collection. Please read the store description about any language or region restrictions.
STEAM CD KEY : Use the Steam Key Code on Steam Platform to download and play The Wizards Dark Times. You must login to your Steam Account or create one for free. Download the (Steam Client HERE). Then once you login, click Add a Game (located in the bottom Left corner) -> Activate a Product on Steam. There type in your CD Key and the game will be activated and added to your Steam account game library.
Bundle
Standard Edition