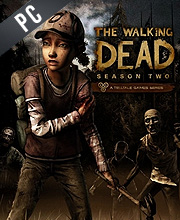 What is The Walking Dead Season 2 CD key?

It's a digital key that allows you to download The Walking Dead Season 2 directly to PC from the official Platforms.

How can I find the best prices for The Walking Dead Season 2 CD keys?

Allkeyshop.com compares the cheapest prices of The Walking Dead Season 2 on the digital downloads market to find the best sales and discount codes on trusted stores.

The game takes place more than a year after the events on The Walking Dead (season one), and is set from the state of Georgia and then moves towards Michigan in the United States. You will follow the story of Clementine, a young girl who survived through the help of Lee Everett. Other characters from the first season will also make a comback on Season Two among them are Omid, Christa, and Luke, among others.

As with the first season, you will control Clementine and direct her around her environment, examine objects and scenery elements, and collect or use objects in order to advance through the story. You can also interact with NPCs using conversation trees. The choices you select in the conversation tree will affect how the story progresses.

If you wish to stay silent, the NPC will treat it as if you decided to say nothing, and will also produce a different result in the story. As this game is set during a zombie apocalypse, you also have to complete quick time elements to prevent Clementine and other key characters in the game from getting killed.

This game is definitely not for the faint at heart. Action is paired with emotional scenes, so you better get your emotions ready before getting your hands on this series.

A satisfying sequel and conclusion to the original game.

telltale is awesome production with the walkingdead series!