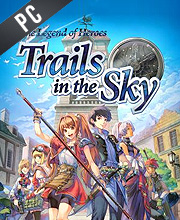 What is The Legend of Heroes Trails in the Sky CD key?

It's a digital key that allows you to download The Legend of Heroes Trails in the Sky directly to PC from the official Platforms.

How can I find the best prices for The Legend of Heroes Trails in the Sky CD keys?

Allkeyshop.com compares the cheapest prices of The Legend of Heroes Trails in the Sky on the digital downloads market to find the best sales and discount codes on trusted stores.

The Legend of Heroes: Trails in the Sky is a Japanese role-playing game developed by Nihon Falcom and published by XSEED and Marvelous USA, Inc.

Come join Estelle, Joshua, Scherazard, Olivier and the rest of the cast as they uncover the secret of Liberl in their first 50+ hour masterpiece, and see what Japanese gamers have been raving about for over ten years. Join the Bracers, an organization founded to serve as police and intermediaries alike, holding above all else the peace and safety of the lands under their jurisdiction.

Whenever a citizen is in need of assistance, he or she may place a request at the local Bracer Guild, even monster extermination, crime prevention or even peace talks among warring nations, the Bracers will do whatever they can to resolve the matter cleanly and efficiently.

The story was amazing, full of emotion and very well written. The music was exceptional and fit perfectly in each scene. The gameplay was engaging and fun, and the various mechanics set in place just further enhanced the experience. This game is fully recommended to anyone looking for a long and wonderful RPG.

Zoom 1m 3m 1y All
Track product
GOG.COM CD KEY : You need to register on Gog.com, then use the GOG Key to download and activate your game to play The Legend of Heroes Trails in the Sky.
PUBLISHER WEBSITE CD KEY: Use the CD Key Code to download directly on the Official Website or from the store to play The Legend of Heroes Trails in the Sky. Follow the instructions given by the store. Verify languages available and possible region restrictions before buying.
EU STEAM CD KEY: Requires an EUROPEAN IP address or you must activate it with a VPN (Virtual Private Network) in order to play The Legend of Heroes Trails in the Sky. Might have languages restrictions or language packs. Read the description on the store game page to know if the EU IP is only needed for activation or for playing also (maybe on EU Servers). Most of the stores offer you their help, or show you how to do this with a tutorial to follow.
STEAM CD KEY : Use the Steam Key Code on Steam Platform to download and play The Legend of Heroes Trails in the Sky. You must login to your Steam Account or create one for free. Download the (Steam Client HERE). Then once you login, click Add a Game (located in the bottom Left corner) -> Activate a Product on Steam. There type in your CD Key and the game will be activated and added to your Steam account game library.
Standard Edition
Compare Choose & Buy Download (743)

@mods What happened to Trails in the Sky SC (Second Chapter)? There are only this and the 3rd chapter.
I saw it here on allkeyshop, a few weeks ago, but now it’s disappeared.

It is available, you can use the keyword “Trails in the Sky” and all the available editions/chapters will be shown.

If you have more questions, feel free to contact us at support@allkeyshop.com