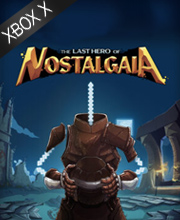 What is The Last Hero of Nostalgaia Game Code?

It's a digital key that allows you to download The Last Hero of Nostalgaia directly to Xbox Series X from Xbox Live.

How can I find the best prices for The Last Hero of Nostalgaia on Xbox Series X ?

Allkeyshop.com compares the cheapest prices of The Last Hero of Nostalgaia on the digital downloads market to find the best sales and discount codes on trusted stores.

The satirical action-adventure The Last Hero of Nostalgia is based on a perverse and evil tale. Nostalgia plunges you into almost certain death at every step with its hard but fair fighting, full character customization, distinctive battle armor, and compelling story mechanics rich in lore.

Although Nostalgaia does have some shortcomings that put it below the games it’s trying to ape, the fact that it manages to get even a little bit close is a feat of its own. Whether you’re an IP freak like me who’s happy seeing a ton of love for gaming, someone looking to get into the Soulsborne genre, or a FromSoft veteran that’s looking for something new, there’s something in Nostalgaia for everyone.

The Last Hero of Nostalgaia is an effective Soulslike that has a few plaguing issues like an underwhelming script and a lack of response from bosses.