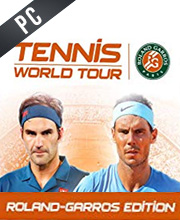 It's a digital key that allows you to download Tennis World Tour Roland Garros Edition directly to PC from the official Platforms.

How can I find the best prices for Tennis World Tour Roland Garros Edition CD keys?

Tennis World Tour: Roland Garros Edition is a sports video game that is developed by Breakpoint and published by Bigben Interactive.

Additional things that come with the Roland-Garros Edition are the Manolo Santana court from the Mutua Madrid Open, two legendary players who are John McEnroe and Andre Agassi. Players will also get to receive 5 skill cards, an exclusive coach, three Wilson Pro Staff rackets, a complete official outfit and a player badge

STEAM CD KEY : Use the Steam Key Code on Steam Platform to download and play Tennis World Tour Roland Garros Edition. You must login to your Steam Account or create one for free. Download the (Steam Client HERE). Then once you login, click Add a Game (located in the bottom Left corner) -> Activate a Product on Steam. There type in your CD Key and the game will be activated and added to your Steam account game library.
Standard Edition