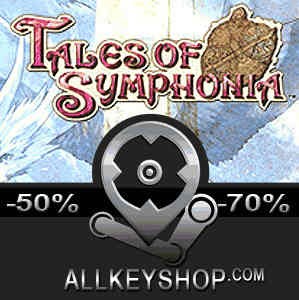 What is Tales of Symphonia CD key?

It's a digital key that allows you to download Tales of Symphonia directly to PC from the official Platforms.

How can I find the best prices for Tales of Symphonia CD keys?

Allkeyshop.com compares the cheapest prices of Tales of Symphonia on the digital downloads market to find the best sales and discount codes on trusted stores.

Tales of Symphonia HD is a J-RPG video game developed and edited by BANDAI NAMCO Entertainment.

The scenario takes place in a world named Sylvarant that was in war against Tesseha’lla, unfortunately the war made the Kharlan tree, who gived infinity mana to the world, to die.

You incarnate Lloyd Irving, a young man orphan, that has been raised by a dwarf, 4000 years after the war ended. Now, the two worlds aren’t balanced with the limited mana remaining. If Sylvarant dry out of all his mana, it will mean the end of the world. You will have to go on a journey to save it, having as objective to replenish the mana. You accompany Colette Brunet, that has been chosen for the task, among with your friend Genis Sage and the two guardians of the chosen, Raine Sage and Kratos Aurion.

The combat system is in 3D real time battle, where you control directly your character, you will be able to perform standard attacks, special ones and magic. The game give the possibility to play in co-op up to 4 players, each of them controlling one character in the battle. But outside the fights, only 1 player can do the exploration part.

The game has an amazing story to discover and his lifetime it’s huge, count more than 80 hours from the beginning to the end of it!

Zoom 1m 3m 1y All
Track product
EU STEAM CD KEY: Requires an EUROPEAN IP address or you must activate it with a VPN (Virtual Private Network) in order to play Tales of Symphonia. Might have languages restrictions or language packs. Read the description on the store game page to know if the EU IP is only needed for activation or for playing also (maybe on EU Servers). Most of the stores offer you their help, or show you how to do this with a tutorial to follow.
STEAM CD KEY : Use the Steam Key Code on Steam Platform to download and play Tales of Symphonia. You must login to your Steam Account or create one for free. Download the (Steam Client HERE). Then once you login, click Add a Game (located in the bottom Left corner) -> Activate a Product on Steam. There type in your CD Key and the game will be activated and added to your Steam account game library.
STEAM KEY ROW : It means for Rest Of the World countries which are not concerned by the region restrictions. This product can't be purchased and activated in Several countries. Please read the store description to know the full list of countries which are concerned. Use the key to Download and play Tales of Symphonia on Steam.
Bonus Edition
Standard Edition
Compare Choose & Buy Download (772)

It is a good game and worth the money, great story line, Recommended to all, thanks.

it’s very nice game …
i want play this game but … problem is the points …
thanks .