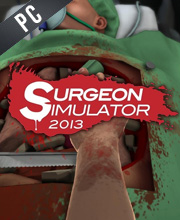 What is Surgeon Simulator 2013 CD key?

It's a digital key that allows you to download Surgeon Simulator 2013 directly to PC from the official Platforms.

How can I find the best prices for Surgeon Simulator 2013 CD keys?

Allkeyshop.com compares the cheapest prices of Surgeon Simulator 2013 on the digital downloads market to find the best sales and discount codes on trusted stores.

It uses a first player perspective as the gamer assumes the role of the protagonist named Nigel Burke, a would-be surgeon taking lives into his own hands, performing life-saving surgical operations on passive patients.

You’ll enjoy this hilarious and slightly outrageous operation sim as you go through all of the darkly humorous challenges by completing a heart transplant, do surgical maneuvers and most importantly, save lives armed only with an arsenal of clumsy and unseemly suitable tools and shaky hands that are really difficult to control by using a combination of keyboard and mouse actions.

With graphics that are clean and polished, a soundtrack that is mainly the general hospital/emergency theme tune the whole time, Surgeon Simulator 2013 may be filled with a crazy yet fun concept but it surprisingly ended up as a great game. With that, you will surely get hooked, playing it for hours and hours and wouldn’t know when to stop!

*(Can be different or change over time for each seller. Please refer to the seller’s website)

STEAM CD KEY : Use the Steam Key Code on Steam Platform to download and play Surgeon Simulator 2013. You must login to your Steam Account or create one for free. Download the (Steam Client HERE). Then once you login, click Add a Game (located in the bottom Left corner) -> Activate a Product on Steam. There type in your CD Key and the game will be activated and added to your Steam account game library.
Anniversary Edition
Bundle
Standard Edition
Compare Choose & Buy Download (689)

Very cheap surgeon simulator, interesting for the fans of this genre!

this is one of the most innovative surgeon simulator ever, can’t wait to try it out