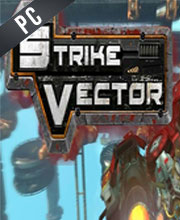 What is Strike Vector CD key?

It's a digital key that allows you to download Strike Vector directly to PC from the official Platforms.

How can I find the best prices for Strike Vector CD keys?

Allkeyshop.com compares the cheapest prices of Strike Vector on the digital downloads market to find the best sales and discount codes on trusted stores.

This game does not feature any single player mode instead it is focused on its fast-paced multiplayer content. When you first start of the game it is going to be awkward because of its fast-paced motion until you get the hang of it. It features a few different modes in which you can choose from: Team Death Match, Death Match, Bounty Hunter, and Domination.

Also, you can have three preferences sets so you can choose between weapons and gadgets. There are two movement modes: Jet Mode and Stationary. Jet Mode lets you reach a high speed, evade and intercept others while Stationary Mode gives you more precision helps you hold and defend key locations.

As you level up your aircraft you can unlock some items which you can use to customize your spaceship. Each segment of the ship there is about three different portions. You are able to set a custom color to your liking. Strike Vector will test your skills and reflexes against other players. Individual aiming and piloting skills are mandatory to fulfill team missions.

STEAM GIFT : A Steam gift is a one-time transfer you receive. You activate and install Strike Vector to play on Steam, it is a non-refundable game that stays in your Steam games collection. Please read the store description about any language or region restrictions.
STEAM CD KEY : Use the Steam Key Code on Steam Platform to download and play Strike Vector. You must login to your Steam Account or create one for free. Download the (Steam Client HERE). Then once you login, click Add a Game (located in the bottom Left corner) -> Activate a Product on Steam. There type in your CD Key and the game will be activated and added to your Steam account game library.
Standard Edition

Although it has a dwindling community ; this game is beautiful skill based and extremely fun

An awesome game with good graphics, looks quite awesome but is it too much to pay? Your call..