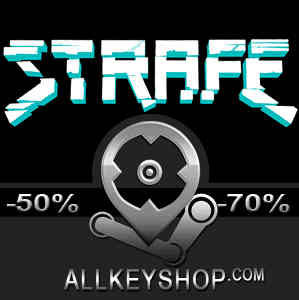 What is STRAFE CD key?

It's a digital key that allows you to download STRAFE directly to PC from the official Platforms.

How can I find the best prices for STRAFE CD keys?

Allkeyshop.com compares the cheapest prices of STRAFE on the digital downloads market to find the best sales and discount codes on trusted stores.

STRAFE is a first-person shooter action video game that contains violence and gore. The game is developed by Pixel Titans and published by Devolver Digital.

You will play as a scrapper who collects scrap for recycling facilities. You are then commissioned to join another spacecraft called the Icarus in the far edges of space to do a job. Communication is absolutely impossible due to the far location of this craft. Upon reaching Icarus, you notice that something is wrong and you are sucked into a nightmare.

Choose your weapons! There are a lot of weapons to choose from like shotguns, railguns, machineguns, etc. The gameplay is fast so doesn’t blink or you’ll die! The game’s levels are randomly generated so everything is unpredictable. Also, whenever you die, power-ups, enemies, rooms and everything gets moved around every single time.

With the new technology of UBER-GORE, the death will be evident everywhere, as it will not fade away. Kill an enemy with blood stains scattered about and add to it every single time to create a masterpiece.

Conquer all four unique zones in the game that includes four levels each. Choose from 30+ weapons to kill 20+ types of enemies. Get to upgrade your weapons to have a kickass time blowing your enemies up to smithereens.

Get to enjoy the action, violence, and gore that STRAFE has to offer!

GOG.COM CD KEY : You need to register on Gog.com, then use the GOG Key to download and activate your game to play STRAFE.
PUBLISHER WEBSITE CD KEY: Use the CD Key Code to download directly on the Official Website or from the store to play STRAFE. Follow the instructions given by the store. Verify languages available and possible region restrictions before buying.
EU STEAM CD KEY: Requires an EUROPEAN IP address or you must activate it with a VPN (Virtual Private Network) in order to play STRAFE. Might have languages restrictions or language packs. Read the description on the store game page to know if the EU IP is only needed for activation or for playing also (maybe on EU Servers). Most of the stores offer you their help, or show you how to do this with a tutorial to follow.
STEAM GIFT : A Steam gift is a one-time transfer you receive. You activate and install STRAFE to play on Steam, it is a non-refundable game that stays in your Steam games collection. Please read the store description about any language or region restrictions.
STEAM CD KEY : Use the Steam Key Code on Steam Platform to download and play STRAFE. You must login to your Steam Account or create one for free. Download the (Steam Client HERE). Then once you login, click Add a Game (located in the bottom Left corner) -> Activate a Product on Steam. There type in your CD Key and the game will be activated and added to your Steam account game library.
Gold Edition
Limited Edition
Standard Edition

G2A is best site to buy this game :). Cheapest place to get strafe.

The best store to buy the key is Gamesrocket.de. cheaper you cant find

Great prices for a great game! I absolutely love this site!