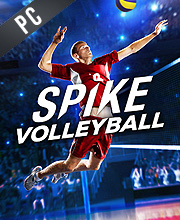 What is Spike Volleyball CD key?

It's a digital key that allows you to download Spike Volleyball directly to PC from the official Platforms.

How can I find the best prices for Spike Volleyball CD keys?

Allkeyshop.com compares the cheapest prices of Spike Volleyball on the digital downloads market to find the best sales and discount codes on trusted stores.

SPIKE VOLLEYBALL is a sports, volleyball simulation game published by Bigben Interactive and developed by Black Sheep Studio. This game is also available for PC.

As far as critics are concerned, this is the only simulation game for all volleyball fans across the globe. Enjoy a huge roster of 50 national volleyball teams for both men and women. Get ready to have very competitive yet fun-filled experiences as both men’s and women’s volleyball teams lock horns to validate their wit and mettle.

The game provides a very realistic simulation experience that adds to its captivating nature. Spike Volleyball is very immersive so don’t be alarmed if you find yourself celebrating every victory and dreading every loss as you would in real life.

Manage your own team and take it to the apex in the distinguished Career mode. Indulge in many international tournaments, and mold your tactics deceptively to surprise your unsuspecting opponents to become a world champion.

For the best chance at victory you must be tactically adept with quick reflexes, razor sharp skills and possess a willingly cooperative spirit. For the more casual type of gamers, fret not because the controls are super easy. The game has a high skill cap and a low skill floor which makes it viable for players of all skill levels. Spike Volleyball features full controller support, single player, multi-player, local player and online multiplayer.

Zoom 1m 3m 1y All
Track product
EU STEAM CD KEY: Requires an EUROPEAN IP address or you must activate it with a VPN (Virtual Private Network) in order to play Spike Volleyball. Might have languages restrictions or language packs. Read the description on the store game page to know if the EU IP is only needed for activation or for playing also (maybe on EU Servers). Most of the stores offer you their help, or show you how to do this with a tutorial to follow.
STEAM CD KEY : Use the Steam Key Code on Steam Platform to download and play Spike Volleyball. You must login to your Steam Account or create one for free. Download the (Steam Client HERE). Then once you login, click Add a Game (located in the bottom Left corner) -> Activate a Product on Steam. There type in your CD Key and the game will be activated and added to your Steam account game library.
Standard Edition
Compare Choose & Buy Download (743)