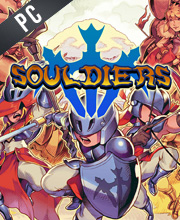 What is Souldiers CD key?

It's a digital key that allows you to download Souldiers directly to PC from the official Platforms.

How can I find the best prices for Souldiers CD keys?

Allkeyshop.com compares the cheapest prices of Souldiers on the digital downloads market to find the best sales and discount codes on trusted stores.

Souldiers is an action platformer with elements of Metroidvania like exploration and Soulslike combat in a pixel art-themed skin developed by Retro Forge, while out fighting for the glory of your kingdom, you and your fellow soldiers are whisked away by a Valkyrie to the lands of Terragaya, a plane that’s halfway between life and the afterlife. You and your compatriots are given the task of locating the guardian in order to move on to the next world. One small problem, you and your compatriots were never actually dead. Battle your way to the heart of the mystery, outwit cunning enemies, solve nefarious puzzles, upgrade your character, and explore every corner of this intricate 16-bit world.

A well-executed and impressively detailed mix of Metroidvania exploration, Soulslike combat, and role-playing style customization that’s marred only by its demanding controls.

This Edition of Souldiers includes the base game plus the digital Artbook which contains concept art and final models and the 44-tracks of the OST in both MP3 and WAV files.

Zoom 1m 3m 1y All
Track product
GOG.COM CD KEY : You need to register on Gog.com, then use the GOG Key to download and activate your game to play Souldiers.
STEAM CD KEY : Use the Steam Key Code on Steam Platform to download and play Souldiers. You must login to your Steam Account or create one for free. Download the (Steam Client HERE). Then once you login, click Add a Game (located in the bottom Left corner) -> Activate a Product on Steam. There type in your CD Key and the game will be activated and added to your Steam account game library.
Deluxe Edition
Standard Edition
Compare Choose & Buy Download (791)