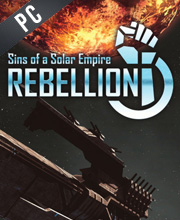 What is Sins of a Solar Empire Rebellion CD key?

It's a digital key that allows you to download Sins of a Solar Empire Rebellion directly to PC from the official Platforms.

How can I find the best prices for Sins of a Solar Empire Rebellion CD keys?

Allkeyshop.com compares the cheapest prices of Sins of a Solar Empire Rebellion on the digital downloads market to find the best sales and discount codes on trusted stores.

Rebellion, as a stand-alone expansion, contains all the features of the previous expansion, Sins of a Solar Empire Trinity. Additional content aside from the Trinity expansion are also included such as new factions (Loyalist and Rebel), the new Titan Class Warships, new and updated Capital Ships, new Corvetto Class ships, and finally, updated visuals.

The game now also includes multiple paths towards your victory, including Military, Diplomatic, Research, Last Flagship Standing, Last Capital Standing, and Occupation. More than 60 minutes of new music and countless sound effects and voice overs have also been added, bringing more drama in the game. New and updated tutorials as well as a number of optimizations provide a better experience and game performance than ever before.