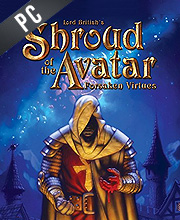 What is Shroud of the Avatar Forsaken Virtues CD key?

It's a digital key that allows you to download Shroud of the Avatar Forsaken Virtues directly to PC from the official Platforms.

How can I find the best prices for Shroud of the Avatar Forsaken Virtues CD keys?

Allkeyshop.com compares the cheapest prices of Shroud of the Avatar Forsaken Virtues on the digital downloads market to find the best sales and discount codes on trusted stores.

Shroud of the Avatar: Forsaken Virtues is a fantasy role-playing video game developed and published by Portalarium. It is a combination of single player narrative with a sandbox MMO.

If the player wants to play through the story online he can play with everyone in a single world with three different online modes- Single Player, Friends, and Open. Players will venture through hours and hours of story in an interactive world each of the choices they make will have consequences and they get to play an important part in creating their own story into a bizzare world surrounded by lore.

Witness numerous customization options including hundreds of skills and spells to choose from and new ways to prepare and fight in an RPG by building custom decks of skills and dynamically activating them in combat.

This will be your favorite game right now and maybe forever if great things continue this way. Great work to Richard Garriot, Starr Long, and the whole Portalarium team!

STEAM CD KEY : Use the Steam Key Code on Steam Platform to download and play Shroud of the Avatar Forsaken Virtues. You must login to your Steam Account or create one for free. Download the (Steam Client HERE). Then once you login, click Add a Game (located in the bottom Left corner) -> Activate a Product on Steam. There type in your CD Key and the game will be activated and added to your Steam account game library.
Early Access
Standard Edition

This game has a really ‘lived in’ feel, adventure and find a dragonbone throne, pack it up and put it in the house that you farm all week to pay 60,000g for. sit in the top floor of your house looking over the harbor as people run about questing and trading.
When this game is finished, it will be very good.