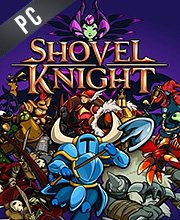 What is Shovel Knight CD key?

It's a digital key that allows you to download Shovel Knight directly to PC from the official Platforms.

How can I find the best prices for Shovel Knight CD keys?

Allkeyshop.com compares the cheapest prices of Shovel Knight on the digital downloads market to find the best sales and discount codes on trusted stores.

While he was away, The Enchantress grabbed the chance to rise to power. She was able to unseal the Tower of Fate and plans to spread evil across the land. Upon hearing this news Shovel Knight sought to go to the tower to save Shield Knight. Threatened by this, The Enchantress deploys the Order of No Quarter to get rid of Shield Knight. There are eight members of the order, namely King Knight, Treasure Knight, Mole Knight, Plague Knight, Polar Knight, Propeller Knight, Tinker Knight and Black Knight. But nothing will stop Shovel Knight from his beloved.

Your main weapon to use as you save Shield Knight is a shovel. Slice enemies with your shovel and use it as well to dig for treasure. You can also use it as a ‘pogo stick’ and jump on enemies, killing them.

Get to help Shovel Knight meet Shield Knight once again in this epic adventure.

Zoom 1m 3m 1y All
Track product
GOG.COM CD KEY : You need to register on Gog.com, then use the GOG Key to download and activate your game to play Shovel Knight.
STEAM CD KEY : Use the Steam Key Code on Steam Platform to download and play Shovel Knight. You must login to your Steam Account or create one for free. Download the (Steam Client HERE). Then once you login, click Add a Game (located in the bottom Left corner) -> Activate a Product on Steam. There type in your CD Key and the game will be activated and added to your Steam account game library.
Standard Edition
Compare Choose & Buy Download (772)