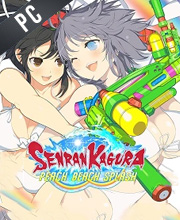 It's a digital key that allows you to download SENRAN KAGURA Peach Beach Splash directly to PC from the official Platforms.

How can I find the best prices for SENRAN KAGURA Peach Beach Splash CD keys?

Senran Kagura Peach Beach Splash is a mature action third-person shooter game a spin-off of the Senran Kagura series where instead of wielding kunai and shuriken the girls will be wielding water guns while clad in bikinis instead developed by series veterans Tamsoft Corporation. Summoned to a mysterious tournament by its shady organizer buxom shinobi students team up and face off with each other, using all kinds of water weapons to soak and splash their opponents. Customize your own team of five from the more than 30 girls available, lead them through battles across a sprawling single-player campaign, or go online to take on teams worldwide.

The abundance of bouncing, wet boobies that Senran Kagura: Peach Beach Splash is full of is, strangely enough, not capable of making this something more than what it is: a subpar, repetitive, extremely grindy third-person shooter that’s actually boring (yes, boring) to look at.

Zoom 1m 3m 1y All
Track product
STEAM CD KEY : Use the Steam Key Code on Steam Platform to download and play SENRAN KAGURA Peach Beach Splash. You must login to your Steam Account or create one for free. Download the (Steam Client HERE). Then once you login, click Add a Game (located in the bottom Left corner) -> Activate a Product on Steam. There type in your CD Key and the game will be activated and added to your Steam account game library.
Standard Edition
Compare Choose & Buy Download (743)