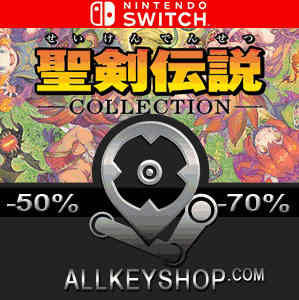 It's a digital key that allows you to download Seiken Densetsu Collection directly to Nintendo Switch directly from Nintendo eShop.

How can I find the best prices for Seiken Densetsu Collection on Nintendo Switch ?

Allkeyshop.com compares the cheapest prices of Seiken Densetsu Collection on the digital downloads market to find the best sales and discount codes on trusted stores.

Seiken Densetsu Collection, developed and published by Square Enix is a series of action role-playing video games also known as Secret of Mana.

Play the collection with other friends throught the co-op options and beat all the three games of the series, which now come in a single place and just one price.

The stories of these games began as a side story to the franchise Final Fantasy and there are many elements of inspiration dropped as easter eggs. The collection is celebrating the 25th anniversary since the first release.

The story speaks about how a group of boys battles against giant beasts in order to save the civilization. These beasts were sent by angered gods and if the war is lost by humanity, the vital source of mana would be destroyed.

Show yourself as a brave wanderer Enter the fantasy 2D world of Seiken Densetsu Collection game and fight against the forces that want to steal the power of the world.

JAPAN BOX GAME : This is a Japan import of Seiken Densetsu Collection Nintendo Switch in Box Edition (DVD-CD ROM). This is not a downloadable product. Please read the sellers page for any additional costs (taxes, shipping), delivery time for your country and languages available.
Standard Edition