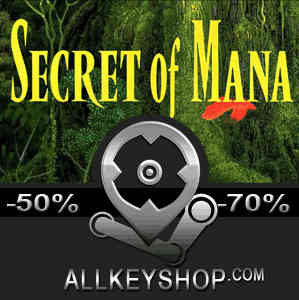 What is Secret of Mana CD key?

It's a digital key that allows you to download Secret of Mana directly to PC from the official Platforms.

How can I find the best prices for Secret of Mana CD keys?

Allkeyshop.com compares the cheapest prices of Secret of Mana on the digital downloads market to find the best sales and discount codes on trusted stores.

Secret of Mana is an action role-playing video game that is developed and published by Square Enix.

Originally released in 1993, the memorable adventure is making a comeback in its full 3D remake glory. Bringin back Randi, Primm, and Popoi and taking on their amazing adventure all remade into modern 3D graphics. Expect new controls, a newly arranged musical score as well as voiced characters and great new content.

Travel back down memory lane as you play Secret of Mana but now with beautifully upgraded music and graphics.

EU STEAM CD KEY: Requires an EUROPEAN IP address or you must activate it with a VPN (Virtual Private Network) in order to play Secret of Mana. Might have languages restrictions or language packs. Read the description on the store game page to know if the EU IP is only needed for activation or for playing also (maybe on EU Servers). Most of the stores offer you their help, or show you how to do this with a tutorial to follow.
EUROPEAN STEAM GIFT : It’s a steam gift for Europe which requires an European IP address to activate and to play Secret of Mana on Steam. Read carefully the store description about region and language restrictions.
STEAM CD KEY : Use the Steam Key Code on Steam Platform to download and play Secret of Mana. You must login to your Steam Account or create one for free. Download the (Steam Client HERE). Then once you login, click Add a Game (located in the bottom Left corner) -> Activate a Product on Steam. There type in your CD Key and the game will be activated and added to your Steam account game library.
Standard Edition

iam new here but have bin using this website for years

Secret of Mana is an action role-playing video game that is developed and published by Square Enix.

Can’t wait for this remake, Secret of mana is one of the best SNES rpg games.

This game looks really cool and very fun to play, if you want this game this is your change to get it 🙂

Cheapest place to buy Secret of Mana at the moment is at cdkeys.com