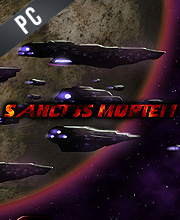 What is Sanctus Mortem CD key?

It's a digital key that allows you to download Sanctus Mortem directly to PC from the official Platforms.

How can I find the best prices for Sanctus Mortem CD keys?

Allkeyshop.com compares the cheapest prices of Sanctus Mortem on the digital downloads market to find the best sales and discount codes on trusted stores.

Sanctus Mortem is a role-playing video game that is developed and published by Kisareth Studios.

It also seems that Captain Hector of the Thrasik warship named Rhoube has a fighting chance as the fate of billions rest in his hands and the determined scientists that are set to unlock a powerful secret. Captain Hector will come face to face with the military governments as well as empress, and this is his fate.

Get to travel through the beautifully rendered universe with different planets and stores. Enjoy the Active-Time-Battle system and use futuristic weapons. As you level up, upgrade your ship to have a better chance of winning against the enemy fleets. There are also some fighting machines available called Vords which you can pilot and augment. In addition to all these, some mini-games, some optional areas and so much more will be available.

STEAM CD KEY : Use the Steam Key Code on Steam Platform to download and play Sanctus Mortem. You must login to your Steam Account or create one for free. Download the (Steam Client HERE). Then once you login, click Add a Game (located in the bottom Left corner) -> Activate a Product on Steam. There type in your CD Key and the game will be activated and added to your Steam account game library.
Standard Edition. Read the store description to know the content.

Be the first one to write a review about Sanctus Mortem !

This looks like a well made RPG built with RPGMaker, the story is praised in reviews, the price is fine for a 10 hours gameplay game.