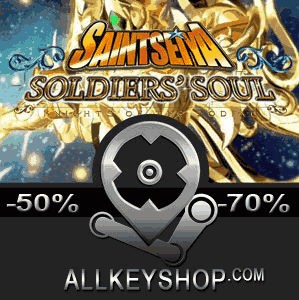 You can participate to these tests by adding comments about your digital download purchase in the store review page. Enjoy the best deals for Saint Seiya Soldiers Soul CD Key with Allkeyshop.com!

Saint Seiya Soul Soldiers is a fighting game developed by Dimps and published by Namco Bandai Entertainment. This Japanese game is set in the legendary world of the Knights of the Zodiac and is the first video game adapted from the new animated series Saint Seiya – Soul of Gold.

Relive the military adventures of your favorite hero through this game that offers no less than six different game modes. The Cosmos Legend mode consists of four chapters: the Sanctuary of Poseidon, Hades and first-aside land of Asgard. Each chapter allows you to replay several battles of the animated series with their main characters.

Battle Mode d’Or, which is a new story, is dedicated to the Golden Knights wearing the fabulous divine armor. You can choose each of the Golden Knights then you must win several battles to unlock the other modes of play. The player versus player mode provides duels against players or player against machine.

The mode Galactic Wars is a tournament that welcomes 8 participants (player or computer). Survival mode allows you to measure yourself against waves of enemies until exhaustion. Finally, Battle Mode online where you compete with other players and try to get the top spot.

Nearly 70 characters, if you count the different versions of the same character, are proposed and have specific fighting techniques but also particularly deadly special moves. You can also equip different armor which may be more or less powerful based on your needs. You can also make purchases in the online store: armor, music, arena, bonus …

Its soundtrack and sound effects of good quality, its graphics and visual effects are not only held to a high standard but also reviled in beautiful cutscenes in 3D, which make you relive the best moments in the history of Saint Seiya, you are immersed in the heart of this manga and its epic battles. Though the characters speak in Japanese for greater immersion subtitles allow you to monitor dialogues.

Fans of Saint Seiya or fighting games, this game has everything you need. Go ahead and become a legendary Knight!

Region
Steam : STEAM CD KEY : Use the Steam Key Code on Steam Platform to download and play Saint Seiya Soldiers Soul. You must login to your Steam Account or create one for free. Download the (Steam Client HERE). Then once you login, click Add a Game (located in the bottom Left corner) -> Activate a Product on Steam. There type in your CD Key and the game will be activated and added to your Steam account game library.


Steam EMEA : STEAM EMEA KEY : What is Steam Key EMEA signification? EMEA means for Europe, Middle East and Africa and several other countries. Please read the store description about country and language restrictions to know which are concerned. Use the key to Download and play Saint Seiya Soldiers Soul on Steam.


Steam gift : STEAM GIFT : A Steam gift is a one-time transfer you receive. You activate and install Saint Seiya Soldiers Soul to play on Steam, it is a non-refundable game that stays in your Steam games collection. Please read the store description about any language or region restrictions.

good triple A game with good graphics, the price is overpriced tough