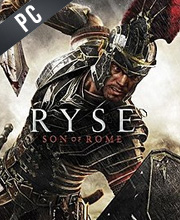 What is Ryse Son of Rome CD key?

It's a digital key that allows you to download Ryse Son of Rome directly to PC from the official Platforms.

How can I find the best prices for Ryse Son of Rome CD keys?

Allkeyshop.com compares the cheapest prices of Ryse Son of Rome on the digital downloads market to find the best sales and discount codes on trusted stores.

Ryse Son of Rome is an action–adventure game developed and published by Crytek, and is played in a third-person point of view.

Take a journey through the Roman Empire as you follow the story of Marius Titus, a Roman centurion who eventually becomes one of the leaders in the Roman Legion.

The story begins with Marius Titus witnessing his family’s murder through the hands of barbarian bandits. He then decides to travel with the Roman army to Britannia to exact revenge for his loved ones. As Marius rises from one rank to another, he must become the leader he is expected to be, and at the same time, be the defender of his Empire as he also goes through his quest for vengeance. He will later realize that the fight is so much closer to home as he expected it to be.

Ryse Son of Rome not only features an immersive story, it also includes other features that will give you a complete Ryse experience. One of its notable features is its graphics. Through the power of Crytek’s CRYENGINE along with High-End PC gaming technology, the game presents realistic characters, brutally realistic and intense combat, and an astounding environment. The game also allows a multiplayer gameplay apart from its single-player campaign.

In Colosseum Mode, you get to fight alongside a friend against a wide array of challenges and enemies inside an Arena packed with thousands of spectators. It also has 26 multiplayer maps that include tile sets that range from British camps to Egyptian deserts. The game also allows you to customize your gladiator with new weapons, armor, shields and consumables to survive in the Arena by using gold and valor (otherwise known as “XP”).

Immerse yourself in the realm of the Roman Empire and go on an adventure like no other with Ryse Son of Rome!

PUBLISHER WEBSITE CD KEY: Use the CD Key Code to download directly on the Official Website or from the store to play Ryse Son of Rome. Follow the instructions given by the store. Verify languages available and possible region restrictions before buying.
EU STEAM CD KEY: Requires an EUROPEAN IP address or you must activate it with a VPN (Virtual Private Network) in order to play Ryse Son of Rome. Might have languages restrictions or language packs. Read the description on the store game page to know if the EU IP is only needed for activation or for playing also (maybe on EU Servers). Most of the stores offer you their help, or show you how to do this with a tutorial to follow.
EUROPEAN STEAM GIFT : It’s a steam gift for Europe which requires an European IP address to activate and to play Ryse Son of Rome on Steam. Read carefully the store description about region and language restrictions.
STEAM GIFT : A Steam gift is a one-time transfer you receive. You activate and install Ryse Son of Rome to play on Steam, it is a non-refundable game that stays in your Steam games collection. Please read the store description about any language or region restrictions.
STEAM CD KEY : Use the Steam Key Code on Steam Platform to download and play Ryse Son of Rome. You must login to your Steam Account or create one for free. Download the (Steam Client HERE). Then once you login, click Add a Game (located in the bottom Left corner) -> Activate a Product on Steam. There type in your CD Key and the game will be activated and added to your Steam account game library.
Bundle
Standard Edition

Ryse: Son of Rome is a nice hack & slash game. I loved the game despite being a bit short. For less than 3€ it’s worth the money.

this is very awesome game