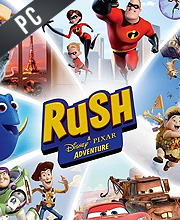 What is RUSH A Disney PIXAR Adventure CD key?

It's a digital key that allows you to download RUSH A Disney PIXAR Adventure directly to PC from the official Platforms.

How can I find the best prices for RUSH A Disney PIXAR Adventure CD keys?

Allkeyshop.com compares the cheapest prices of RUSH A Disney PIXAR Adventure on the digital downloads market to find the best sales and discount codes on trusted stores.

Rush: A Disney Pixar Adventure is an adventure video game that is developed by Asobo Studios and published by Microsoft Studios.

A game for all ages is offered in Rush: A Disney Pixar Adventure. Players, both young and old can get to team up with their favorite characters from their beloved Disney-Pixar movies – The Incredibles, Ratatouille, Up, Cars, Toy Story, and Finding Dory.

Players can get to play cooperatively and interact with their favorite character and solve puzzles as fast as you can with moments that would need agility and speed.

Offering a fast-paced adventure in this one-of-a-kind experience. Get to join Remy, Lightning McQueen, Woody, Mr. and Mrs. Potato Head, and the others. Go through every challenge together through the same screen or also through couch co-op via split-screen with a family member or a friend.

Be the first one to write a review about RUSH A Disney PIXAR Adventure !

Many of our beloved Pixar and Disney characters gathered in this adventure, a fun and family oriented game, worth the asking price.