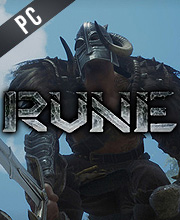 What is Rune CD key?

It's a digital key that allows you to download Rune directly to PC from the official Platforms.

How can I find the best prices for Rune CD keys?

Allkeyshop.com compares the cheapest prices of Rune on the digital downloads market to find the best sales and discount codes on trusted stores.

Rune is an action, role-playing video game that is developed by Human Head Studios and published by Ragnarok Game, LLC.

It is a terrible time, the gods have withheld their protection and the maniacal Loki is destroying everything in the world of Midgard. Your quest will be to destroy Loki, as a Viking warrior, you must choose a god to align with, go through villages in search of the most powerful weapons and finish quests for your chosen gods in order to get their blessings of strength and magic.

But you don’t have to carry the burden alone, join up with your other Viking allies as what they say is true, strength does come in numbers.

You must finish Loki as soon as you can as he plans to keep Midgard in an endless loop of the apocalypse. Be careful as your dying realm is now plagued with huge monsters and feral beasts.

Get to prove yourself as the strongest Viking by killing the mighty Loki!

STEAM GIFT : A Steam gift is a one-time transfer you receive. You activate and install Rune to play on Steam, it is a non-refundable game that stays in your Steam games collection. Please read the store description about any language or region restrictions.
STEAM CD KEY : Use the Steam Key Code on Steam Platform to download and play Rune. You must login to your Steam Account or create one for free. Download the (Steam Client HERE). Then once you login, click Add a Game (located in the bottom Left corner) -> Activate a Product on Steam. There type in your CD Key and the game will be activated and added to your Steam account game library.
STEAM KEY ROW : It means for Rest Of the World countries which are not concerned by the region restrictions. This product can't be purchased and activated in Several countries. Please read the store description to know the full list of countries which are concerned. Use the key to Download and play Rune on Steam.
Classic Edition