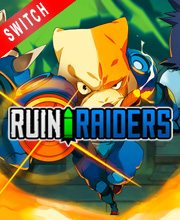 What is Ruin Raiders Game Code?

It's a digital key that allows you to download Ruin Raiders directly to Nintendo Switch directly from Nintendo eShop.

How can I find the best prices for Ruin Raiders on Nintendo Switch ?

Allkeyshop.com compares the cheapest prices of Ruin Raiders on the digital downloads market to find the best sales and discount codes on trusted stores.

Ruin Raiders is a turn-based tactical strategy game with roguelike elements inspired by games like the X-com franchise developed by Overpowered Team. Take control of a squad of animals as they explore the ruins and remnants of advanced civilization in search of great treasures and powerful weapons. Fight hordes of demons, robots, and more whilst upgrading your equipment on the fly and face powerful bosses that hide deep in the abyss.

Ruin Raiders is an attractive adventure featuring adorable animal characters. With surprisingly challenging gameplay and satisfying boss fights, every dungeon you descend into provides a unique challenge. The biggest qualms are that the game can occasionally devolve into a grind-fest and there’s a lack of coherent story.

Zoom 1m 3m 1y All
Track product
NINTENDO CODE : This is a digital code for Ruin Raiders. Use the download code on the Nintendo eShop of your Console. Once connected to the Nintendo eShop, you can enter and redeem the Download Code. Read carefully the store description about any language and region restrictions.
Standard Edition
Compare Choose & Buy Download (772)