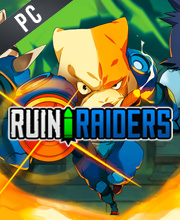 What is Ruin Raiders CD key?

It's a digital key that allows you to download Ruin Raiders directly to PC from the official Platforms.

How can I find the best prices for Ruin Raiders CD keys?

Allkeyshop.com compares the cheapest prices of Ruin Raiders on the digital downloads market to find the best sales and discount codes on trusted stores.

Ruin Raiders is a turn-based tactical strategy game with roguelike elements inspired by games like the X-com franchise developed by Overpowered Team. Take control of a squad of animals as they explore the ruins and remnants of advanced civilization in search of great treasures and powerful weapons. Fight hordes of demons, robots, and more whilst upgrading your equipment on the fly and face powerful bosses that hide deep in the abyss.

I don’t want to seem too down on Ruin Raiders, because the core strategy gameplay works well. If you’re willing to put in the time, it does start to have more variety and more customization after you build up blueprints and base facilities, but the road to that point can be pretty monotonous.

Zoom 1m 3m 1y All
Track product
EU STEAM CD KEY: Requires an EUROPEAN IP address or you must activate it with a VPN (Virtual Private Network) in order to play Ruin Raiders. Might have languages restrictions or language packs. Read the description on the store game page to know if the EU IP is only needed for activation or for playing also (maybe on EU Servers). Most of the stores offer you their help, or show you how to do this with a tutorial to follow.
STEAM CD KEY : Use the Steam Key Code on Steam Platform to download and play Ruin Raiders. You must login to your Steam Account or create one for free. Download the (Steam Client HERE). Then once you login, click Add a Game (located in the bottom Left corner) -> Activate a Product on Steam. There type in your CD Key and the game will be activated and added to your Steam account game library.
Standard Edition
Compare Choose & Buy Download (759)