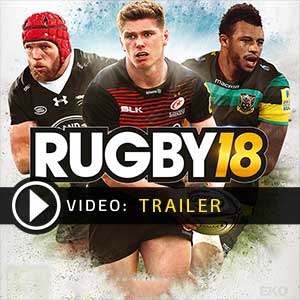 It's a digital key that allows you to download Rugby 18 directly to PC from the official Platforms.

How can I find the best prices for Rugby 18 CD keys?

Allkeyshop.com compares the cheapest prices of Rugby 18 on the digital downloads market to find the best sales and discount codes on trusted stores.

Rugby 18 is a sports video game developed by EKO Software and published by Bigben Interactive.

Get a hold of the most complete rugby game to date with Rugby 18. Offering multiple game phases with intuitive controls as well as innovative gameplay greatly resembling the various situations of a real rugby game. Choose from the official players of the 2017-2018 champion season: Aviva Premiership Rugby, PRO 14, All Blacks, England, Springboks, Wallabies and much more. Strategize carefully whether, on attack or defense, your teammates are sure to be in position waiting for your decisions.

There are different modes to choose from. Play the Career Mode where you can lead your favorite club right to the top. Or play the League Mode that allows you to play in full seasons of the game. Match of the Weeks are also available as well as the My Squad mode where you can build up your dream team by choosing from the 2000+ rugby men available. Get to play with your friends in one-on-one matches either on same screen or online.

Nothing can be more intense than the amazing matches of Rugby 18.

STEAM CD KEY : Use the Steam Key Code on Steam Platform to download and play Rugby 18. You must login to your Steam Account or create one for free. Download the (Steam Client HERE). Then once you login, click Add a Game (located in the bottom Left corner) -> Activate a Product on Steam. There type in your CD Key and the game will be activated and added to your Steam account game library.
Bundle
Standard Edition

Since the update this game is very good. Yes it has a few issues, but its a great platform that I hope the develpers will continue with.