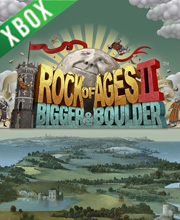 What is Rock of Ages 2 Bigger and Boulder CD key?

It's a digital key that allows you to download Rock of Ages 2 Bigger and Boulder directly to PC from the official Platforms.

How can I find the best prices for Rock of Ages 2 Bigger and Boulder CD keys?

Allkeyshop.com compares the cheapest prices of Rock of Ages 2 Bigger and Boulder on the digital downloads market to find the best sales and discount codes on trusted stores.

The graphics are truly fantastic, the audio is quite high in quality, and the gameplay is fun for those that like racing down a hill, dodging/smashing your way through obstacles.

If you’re a fan of tower defence games, then you’ll likely enjoy the fun elements that Rock of Ages 2 injects into an otherwise fairly dry genre. It’s much better as a local co-op experience, but if you do jump into the single player, you’ll at least get a guffaw or two out of the wacky cut-scenes. It’s just a shame that the same amount of character and personality don’t run over into the actual gameplay.