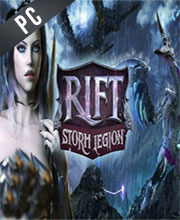 It's a digital key that allows you to download Rift Storm Legion directly to PC from the official Platforms.

How can I find the best prices for Rift Storm Legion CD keys?

Allkeyshop.com compares the cheapest prices of Rift Storm Legion on the digital downloads market to find the best sales and discount codes on trusted stores.

Rift Storm Legion is the first extension of Rift famous MMORPG game edited and developed by Trion Worlds and aims to focus especially on the Storm Legion led by the goddess Dragon Crucia, mother of the clouds of air plane.

The Storm Legion expansion will enhance the base game by adding two new continents to explore, and Dusken Brevane that will triple the size of the world, where you can also follow a frame that tells epic and revealing the true power of Telara as well as access to maps.

You will need to defend the world of Telara, including in the heart of the Bay Storm, a new island city and fortress to the Guardians and the Defiant and also integrating seven new dungeons, three new raids and Chronicle. The extension also serves to advance to level 60 (50 for the basic version of the MMORPG), and proposes a new soul for every vocation.

Storm Legion also promises a new style of play, mainly articulated around rifts, planar against the bosses. It will battle hordes of fantasy creatures, including a Colossus that interacts with the world, some immersion in a world of beauty which has many followers and who will brings many extra hours of discovery and exploration as the scope will be significant, to the delight of conviction like new.

PUBLISHER WEBSITE CD KEY: Use the CD Key Code to download directly on the Official Website or from the store to play Rift Storm Legion. Follow the instructions given by the store. Verify languages available and possible region restrictions before buying.
DLC

Mehishgame, decent graphics, gameplay makes up for it tho, by if you are a fan of wow

nice expansion to a free to play game… wow style.. worth buying if you play