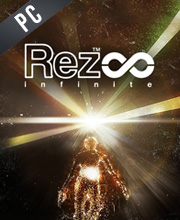 What is Rez Infinite CD key?

It's a digital key that allows you to download Rez Infinite directly to PC from the official Platforms.

How can I find the best prices for Rez Infinite CD keys?

Allkeyshop.com compares the cheapest prices of Rez Infinite on the digital downloads market to find the best sales and discount codes on trusted stores.

Rez Infinite is an action video game developed by Monstar Inc. and Resonair and is published by Enhance Games.

This is a fully remastered classic of one of the most critically acclaimed games – Rez! The game is now available to be played via desktop or via Virtual Reality, your choice. You can once again blast through hordes of enemies as well as huge transforming bosses. Your senses will definitely enjoy the game from the amazing sights and alluring techno soundtrack by Rez.

Free-fly through the 5 levels available in the game in Area X. Razor-sharp visuals has been added in the game with unrestricted resolution as well as double the texture resolution. The soundscapes are enhanced with full 3D audio.

Play Rez Infinite and have the best time ever flying through the hypnotic cyberspace enhanced by the enforced 3D soundscapes. Fight enemies and go through challenging bosses, everything is mind-bending in the game from the visuals to the sounds as well as the gameplay.

EUROPEAN STEAM GIFT : It’s a steam gift for Europe which requires an European IP address to activate and to play Rez Infinite on Steam. Read carefully the store description about region and language restrictions.
STEAM GIFT : A Steam gift is a one-time transfer you receive. You activate and install Rez Infinite to play on Steam, it is a non-refundable game that stays in your Steam games collection. Please read the store description about any language or region restrictions.
STEAM CD KEY : Use the Steam Key Code on Steam Platform to download and play Rez Infinite. You must login to your Steam Account or create one for free. Download the (Steam Client HERE). Then once you login, click Add a Game (located in the bottom Left corner) -> Activate a Product on Steam. There type in your CD Key and the game will be activated and added to your Steam account game library.
Standard Edition