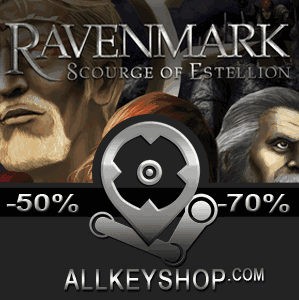 It's a digital key that allows you to download Ravenmark Scourge of Estellion directly to PC from the official Platforms.

How can I find the best prices for Ravenmark Scourge of Estellion CD keys?

Allkeyshop.com compares the cheapest prices of Ravenmark Scourge of Estellion on the digital downloads market to find the best sales and discount codes on trusted stores.

In Ravenmark: Bane Estellion chaos approach of the former Empire of the Raven. In the world of Eclisse, the Empire Estellion power is besieged by an embittered fanatics scourge of Kaysan marsh nation, a nation which was erased from history by the pride of the Empire. While the empire is busy fighting against the ruthless political machinations, his heroes are fighting on the ground to restore the banners of the raven …

You are one of those heroes. Ravenmark: Bane Estellion is a turn based wargame where the strategic placement of soldiers is essential to victory. The battles employ a dynamic system, where the actions of allies and enemies take place in a simultaneous battle phase. Consequently, Ravenmark commanders have to think ahead, anticipating all the movements of their enemies rather than simply react. Character traits, active and piles of statistical capacity among unit involved in Ravenmark and must be analyzed and used in the best way possible.

All of these are easily manageable through the Codex, where you can learn about the different characters and types of units, as well as deep and rich tradition on which the game is based. In Ravenmark, you are free to choose your own training and make good use of the unique control systems will be of vital importance for the win! Will you align your training in a single battle line to facilitate the control and cope better? Or will you keep your small and flexible formations?

This is just one of many choices that you will face while struggling against opponents who hardly leave you breathing space and through your many battles!

Zoom 1m 3m 1y All
Track product
STEAM CD KEY : Use the Steam Key Code on Steam Platform to download and play Ravenmark Scourge of Estellion. You must login to your Steam Account or create one for free. Download the (Steam Client HERE). Then once you login, click Add a Game (located in the bottom Left corner) -> Activate a Product on Steam. There type in your CD Key and the game will be activated and added to your Steam account game library.
Standard Edition
Compare Choose & Buy Download (772)

First things first : it’s a tactical game, it has no strategic layer whatsoever. You are facing predetermined set of tactical tasks to solve, with abundance of story and lore in and between.