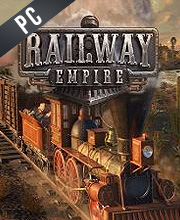 What is Railway Empire CD key?

It's a digital key that allows you to download Railway Empire directly to PC from the official Platforms.

How can I find the best prices for Railway Empire CD keys?

Allkeyshop.com compares the cheapest prices of Railway Empire on the digital downloads market to find the best sales and discount codes on trusted stores.

Railway Empire is a simulation strategy video game that is developed by Gaming Minds Studios and published by Kalypso Media Digital.

Set in the 1830’s in the United States. The world is in the process of never-ending changes. The industry is up to its prime and the battle is on to establish the most powerful and dominant rail empire in all of North America. Create great ideas and effective plans to outgrow your competitors and lead your company into the 20th century.

In this game, your main goal is to lead your company to the top by creating an elaborate and wide-range of rail networks. Purchase over 40 different trains, or buy or build train stations. Maintenance Building and tourist attractions to keep your business and train network on the lead with other competitors.You may manage your own workforce by hiring the best workers to ensure an efficient and effective train service.

Plan and develop over 300 technologies for your trains, to workplace and advance amenities to aid you in your quest of Empire.

EU STEAM CD KEY: Requires an EUROPEAN IP address or you must activate it with a VPN (Virtual Private Network) in order to play Railway Empire. Might have languages restrictions or language packs. Read the description on the store game page to know if the EU IP is only needed for activation or for playing also (maybe on EU Servers). Most of the stores offer you their help, or show you how to do this with a tutorial to follow.
STEAM CD KEY : Use the Steam Key Code on Steam Platform to download and play Railway Empire. You must login to your Steam Account or create one for free. Download the (Steam Client HERE). Then once you login, click Add a Game (located in the bottom Left corner) -> Activate a Product on Steam. There type in your CD Key and the game will be activated and added to your Steam account game library.
EPIC GAMES KEY : Region Free / Worldwide. Requires Epic Games Launcher App in order to play the game. You need to create a free account here in order to download Railway Empire from Epic Plateform . Read the description on the store page about any language or country restrictions.
STEAM KEY ROW : It means for Rest Of the World countries which are not concerned by the region restrictions. This product can't be purchased and activated in Several countries. Please read the store description to know the full list of countries which are concerned. Use the key to Download and play Railway Empire on Steam.
STEAM GIFT : A Steam gift is a one-time transfer you receive. You activate and install Railway Empire to play on Steam, it is a non-refundable game that stays in your Steam games collection. Please read the store description about any language or region restrictions.
EUROPEAN STEAM GIFT : It’s a steam gift for Europe which requires an European IP address to activate and to play Railway Empire on Steam. Read carefully the store description about region and language restrictions.
GOG.COM CD KEY : You need to register on Gog.com, then use the GOG Key to download and activate your game to play Railway Empire.
Standard Edition. Read the store description to know the content.
Complete Collection

Be the first one to write a review about Railway Empire !

cool game, i like Strategy games and i hope to play it soon!

Railway Empire is very fun. I recommend to everyone. Amazing trailer

Railway Empire looks amazing with good graphics. You can buy it with good price now.