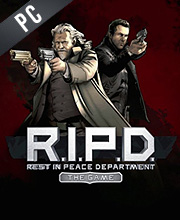 It's a digital key that allows you to download R.I.P.D. The Game directly to PC from the official Platforms.

How can I find the best prices for R.I.P.D. The Game CD keys?

Allkeyshop.com compares the cheapest prices of R.I.P.D. The Game on the digital downloads market to find the best sales and discount codes on trusted stores.

R.I.P.D.  is a game of draw cooperative in the third person developed by Old School Games and published by Altus.

This is no doubt as we perceive the game-play in God Mode, another set of Old School Games. The game was released July 17, 2013 on Xbox, Playstation 3 and Microsoft Windows. Players have the opportunity to play Roy Pulsipher and Nick Walker.

“Horde” mode against the renegades known as the ghosts of “deadoes” who stayed on Earth to escape the final judgment. The method proceeds in “rounds“, five in number with increasing difficulty to progressively thereof. We also have the opportunity to buy and improve weapons such as shotguns, assault rifles and even weapons recalling the film itself, such as bananas and hairdryer, for a touch of ‘gentle humor.As for how to play, you have the choice between liquidate all ghosts or arrest them, allowing a smoother response, but surely more acrobatic.

The game’s story covers the events of the movie from the death of Nick Walker and his arrival at the security agency of the afterlife. An animation genre “comics” presents Roy Pulsipher and several members of the agency that explain what we covet without deadoes reveal their ultimate intentions, after which you enter the tutorial and then in single player or you will face seven zones by cards (themselves seven in number, making a total of 49 zones) with a final boss at every seventh area.

The chance to buy or upgrade weapons will be possible at the end of each zone, to prepare you best for the future. You also unlock challenges that have to do with the film and can even get bonuses in cooperative mode “Horde” if you do more damage. Alone or with a friend, come battle ghosts while discovering the plot of the movie of the same name.

STEAM GIFT : A Steam gift is a one-time transfer you receive. You activate and install R.I.P.D. The Game to play on Steam, it is a non-refundable game that stays in your Steam games collection. Please read the store description about any language or region restrictions.
STEAM CD KEY : Use the Steam Key Code on Steam Platform to download and play R.I.P.D. The Game. You must login to your Steam Account or create one for free. Download the (Steam Client HERE). Then once you login, click Add a Game (located in the bottom Left corner) -> Activate a Product on Steam. There type in your CD Key and the game will be activated and added to your Steam account game library.
Standard Edition