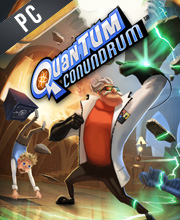 What is Quantum Conundrum CD key?

It's a digital key that allows you to download Quantum Conundrum directly to PC from the official Platforms.

How can I find the best prices for Quantum Conundrum CD keys?

Allkeyshop.com compares the cheapest prices of Quantum Conundrum on the digital downloads market to find the best sales and discount codes on trusted stores.

Quantum Conundrum is a puzzle-platformer strategy game developed by Airtight Games and published by Square Enix.

You will play as a twelve-year-old boy whose uncle is the brilliant but peculiar Professor Fitz Quadwrangle. You are sent to stay with your uncle who appears to be unprepared for your arrival because he’s currently working on an experiment. As the experiment goes wrong in a lot of ways, your uncle gets trapped in a pocket dimension which caused him to lose his memory of what went wrong before, but he’s able to watch and communicate with you.

Now you’re left with the job of finding and rescuing your uncle by using his latest invention, the Interdimensional Shift Device (IDS). This device allows you to switch between dimensions and solve puzzles along the way.

The game’s environment has dimensions left and right, so trying to move a sofa, for example, is easy. Simply switching to the Fluffy Dimension makes objects feel lighter. The Anti-Gravity Dimension, on the other hand, makes things float upward. There are a lot more dimensions you can discover in-game, so better get your hands on this game now!

(May be different, or change over time for some sellers. Please refer to the seller’s website)

STEAM CD KEY : Use the Steam Key Code on Steam Platform to download and play Quantum Conundrum. You must login to your Steam Account or create one for free. Download the (Steam Client HERE). Then once you login, click Add a Game (located in the bottom Left corner) -> Activate a Product on Steam. There type in your CD Key and the game will be activated and added to your Steam account game library.
EU STEAM CD KEY: Requires an EUROPEAN IP address or you must activate it with a VPN (Virtual Private Network) in order to play Quantum Conundrum. Might have languages restrictions or language packs. Read the description on the store game page to know if the EU IP is only needed for activation or for playing also (maybe on EU Servers). Most of the stores offer you their help, or show you how to do this with a tutorial to follow.
EUROPEAN STEAM GIFT : It’s a steam gift for Europe which requires an European IP address to activate and to play Quantum Conundrum on Steam. Read carefully the store description about region and language restrictions.
STEAM GIFT : A Steam gift is a one-time transfer you receive. You activate and install Quantum Conundrum to play on Steam, it is a non-refundable game that stays in your Steam games collection. Please read the store description about any language or region restrictions.
Standard Edition. Read the store description to know the content.

Be the first one to write a review about Quantum Conundrum !