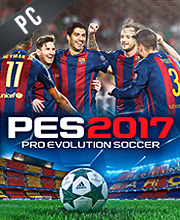 It's a digital key that allows you to download Pro Evolution Soccer 2017 directly to PC from the official Platforms.

How can I find the best prices for Pro Evolution Soccer 2017 CD keys?

Allkeyshop.com compares the cheapest prices of Pro Evolution Soccer 2017 on the digital downloads market to find the best sales and discount codes on trusted stores.

Get to control reality with Pro Evolution Soccer 2017. The game gets you closer to the reality of playing soccer because of its amazing 1st touch control. 1st Touch calculates the many processes of the game to give you a smoother and smarter control of the game.

Passing in PES 2017 has now become an art with the combination of Real Touch and real ball physics. Goal keeping has also leveled up as you will see the most agile goalkeepers in the history of the game. Expect quick reaction to shots as well as awesome fingertip saves from its goalkeepers.

Advanced Instructions will now be available for strategies that are meant for individuals, this also includes tight markings and Tiki-Taka. PES 2017 will give you more depth in controlling your teams with Total Team Control. You will be having access to new options that will be immediately available to you during a match. A great corner kick control will also be accessible to you which will allow you to tailor your playing style.

A major upgrade to the game’s visuals and player movements will also be seen as well as a smarter AI will be experienced.

Enjoy the game’s different modes with all these new and innovative features.

Will your team come out as the champions of the PES 2017? Play the game and find out.

Zoom 1m 3m 1y All
Track product
EU STEAM CD KEY: Requires an EUROPEAN IP address or you must activate it with a VPN (Virtual Private Network) in order to play Pro Evolution Soccer 2017. Might have languages restrictions or language packs. Read the description on the store game page to know if the EU IP is only needed for activation or for playing also (maybe on EU Servers). Most of the stores offer you their help, or show you how to do this with a tutorial to follow.
STEAM CD KEY : Use the Steam Key Code on Steam Platform to download and play Pro Evolution Soccer 2017. You must login to your Steam Account or create one for free. Download the (Steam Client HERE). Then once you login, click Add a Game (located in the bottom Left corner) -> Activate a Product on Steam. There type in your CD Key and the game will be activated and added to your Steam account game library.
Bonus Edition
Standard Edition
Compare Choose & Buy Download (772)

GK4A is the best site to buy Pro Evolution Soccer 2017.

Hi Milos, all our featured stores are safe and trusted. You may also check our store reviews for more details.

Pes is best football game and best price is on Kinguin 🙂

right now kinguin would be the best place to get pes2017

If I was going to get this game it would probably be from here.