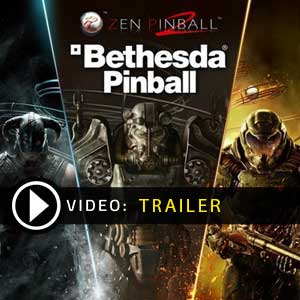 It's a digital key that allows you to download Pinball FX2 Bethesda Pinball directly to PC from the official Platforms.

How can I find the best prices for Pinball FX2 Bethesda Pinball CD keys?

Allkeyshop.com compares the cheapest prices of Pinball FX2 Bethesda Pinball on the digital downloads market to find the best sales and discount codes on trusted stores.

Bethesda Pinball is a simulation video game developed by Zen Studios. This is a downloadable content and would need the base game Pinball FX2 to play.

This is one Pinball game that is like no other. The environments are crazy vicious for a pinball game, making it super epic. This DLC features three iconic pinball tables that are inspired by popular Bethesda games.

The Fallout Pinball table will have you going through a nuclear war-ravaged wasteland. Here, there are factions to join, vaults to raid as well as Bobbleheads to collect!

The Doom Pinball table will have you going for the Demon Slayer title. You would have to go through the UAC research facility and take on mobs of frantic demons.

The third table is the Elder Scrolls V: Skyrim Pinball table. Get to fulfill your destiny as the Dragonborn. This table will let you craft weapons, equip armor, wield magic and so much more!

Of course, there will be great social features like leaderboards as well as score trackings. This is one pinball game that is definitely above par!