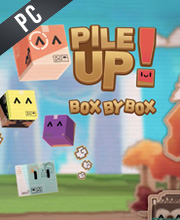 What is Pile Up Box by Box CD key?

It's a digital key that allows you to download Pile Up Box by Box directly to PC from the official Platforms.

How can I find the best prices for Pile Up Box by Box CD keys?

Allkeyshop.com compares the cheapest prices of Pile Up Box by Box on the digital downloads market to find the best sales and discount codes on trusted stores.

Pile Up! Box by Box is a co-op 3D platformer game developed by French studio Seed by Seed, a wholesome game that’s fun for the whole family, an exploration and Collect-A-Thon adventure through a beautiful cardboard world, with simple controls with the only three additional movements aside from the walking directions being jump, slide, and throw. Coordinate with your 4 other players to get past puzzle obstacles that will test your creativity, help the people of this land by taking in quests, and if you’re feeling a bit competitive play the minigames scattered throughout the map.

No matter your age, there’s plenty of fun to be had in Pile-Up! Box by Box. Its papercraft world is beautiful, and exploring each of its levels proves to be an entertaining endeavor filled with enjoyable puzzles. It’s just a shame that it’s all over too quickly. But if being left wanting more is the only real problem, then that’s a pretty good sign of a great game.

This bundle comes with 12 different games published by Handygames, they are designed for couch co-op play but are fully integrated with steam’s Remote Play Together program.

Zoom 1m 3m 1y All
Track product
GOG.COM CD KEY : You need to register on Gog.com, then use the GOG Key to download and activate your game to play Pile Up Box by Box.
EU STEAM CD KEY: Requires an EUROPEAN IP address or you must activate it with a VPN (Virtual Private Network) in order to play Pile Up Box by Box. Might have languages restrictions or language packs. Read the description on the store game page to know if the EU IP is only needed for activation or for playing also (maybe on EU Servers). Most of the stores offer you their help, or show you how to do this with a tutorial to follow.
STEAM CD KEY : Use the Steam Key Code on Steam Platform to download and play Pile Up Box by Box. You must login to your Steam Account or create one for free. Download the (Steam Client HERE). Then once you login, click Add a Game (located in the bottom Left corner) -> Activate a Product on Steam. There type in your CD Key and the game will be activated and added to your Steam account game library.
STEAM KEY ROW : It means for Rest Of the World countries which are not concerned by the region restrictions. This product can't be purchased and activated in Several countries. Please read the store description to know the full list of countries which are concerned. Use the key to Download and play Pile Up Box by Box on Steam.
Bundle
Standard Edition
Compare Choose & Buy Download (743)