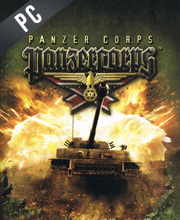 What is Panzer Corps CD key?

It's a digital key that allows you to download Panzer Corps directly to PC from the official Platforms.

How can I find the best prices for Panzer Corps CD keys?

Allkeyshop.com compares the cheapest prices of Panzer Corps on the digital downloads market to find the best sales and discount codes on trusted stores.

Panzer Corps is a turn-based strategic wargame published by Slitherine Ltd. and developed by Flashback Games and The Lordz Games Studio.

Compared to other World War II game campaigns out there, Panzer Corps’ battles take a German (but not explicitly Nazi) standpoint. The game is easy to learn but challenging to master.

The campaigns are dynamic and offers a great deal of diversity, both in their opening scenarios (that is, the invasion of Poland or the Battle of Kursk) and in the manner the campaign develops, according to your performance.

Regardless of your luck, you have a determined set of units that will follow you through the campaign with unwavering loyalty, provided you keep them alive. You earn prestige through battlefield exploits that you can use later on to reinforce your troops back to full power or upgrade them to newer models.

Logistics also play a critical role in strategy in Panzer Corps. Each unit has limited provisions of fuel and ammos that are naturally exhausted through movement and warfare. It requires a full turn to resupply all of a unit’s fuel and ammo, so you must wisely decide when to store up.

Panzer Corps is a new and satisfying 2D wargame experience!

GOG.COM CD KEY : You need to register on Gog.com, then use the GOG Key to download and activate your game to play Panzer Corps.
EUROPEAN STEAM GIFT : It’s a steam gift for Europe which requires an European IP address to activate and to play Panzer Corps on Steam. Read carefully the store description about region and language restrictions.
STEAM GIFT : A Steam gift is a one-time transfer you receive. You activate and install Panzer Corps to play on Steam, it is a non-refundable game that stays in your Steam games collection. Please read the store description about any language or region restrictions.
STEAM CD KEY : Use the Steam Key Code on Steam Platform to download and play Panzer Corps. You must login to your Steam Account or create one for free. Download the (Steam Client HERE). Then once you login, click Add a Game (located in the bottom Left corner) -> Activate a Product on Steam. There type in your CD Key and the game will be activated and added to your Steam account game library.
Gold Edition
Standard Edition

Fine gameplay to play for hours and hours. We can buy it!